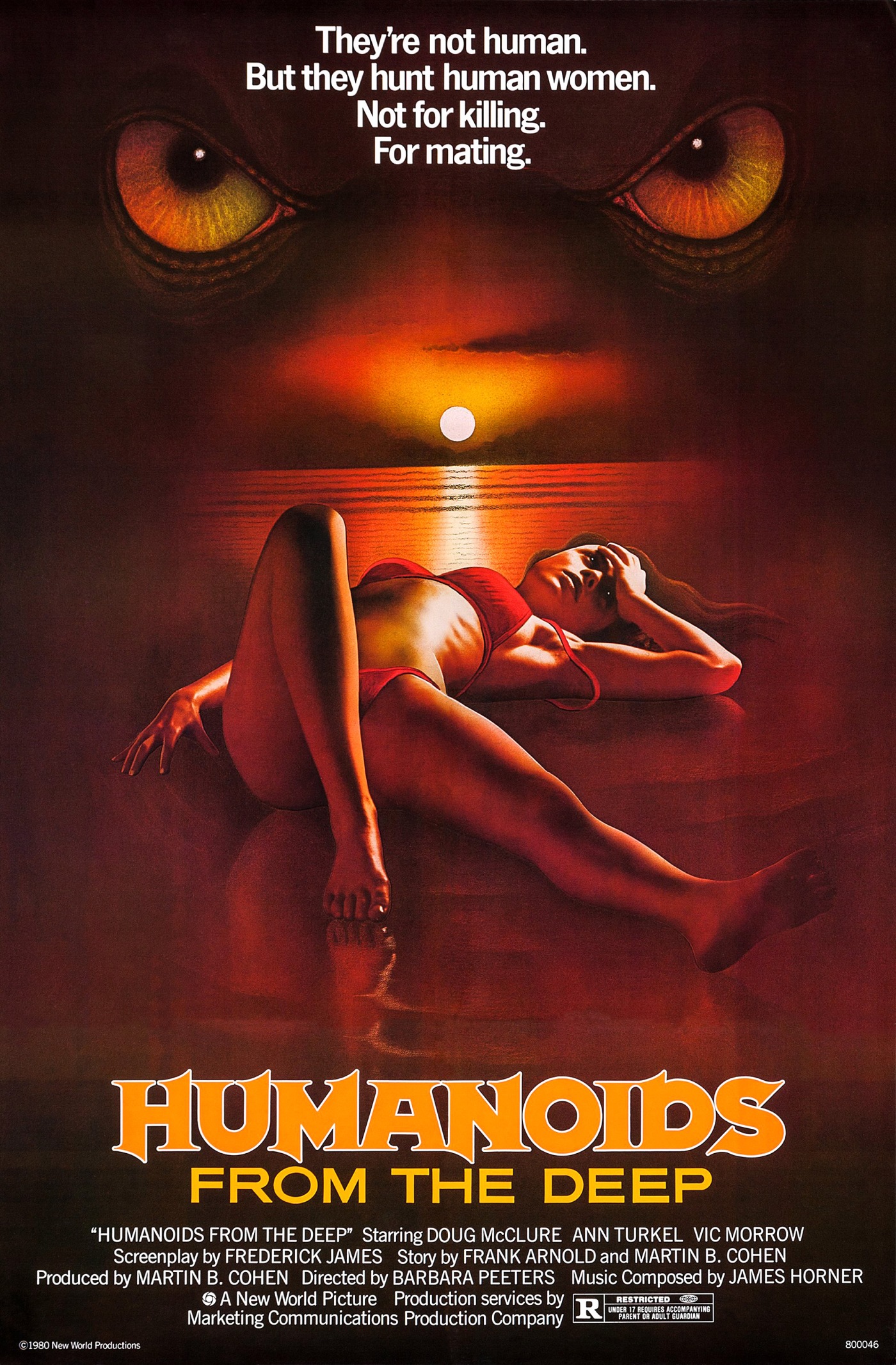 An Overview By Aaron AuBuchon

I know it came after this film, but when I watch Humanoids From the Deep, something always catches in the back of my mind, and I finally figured it out this time: this film is Redneck C.H.U.D.  So imagine the premise of C.H.U.D. but instead of urban homeless victims, we get rural fishermen, and instead of sewer mutants, we get somewhat Lovecraftian river mutants. And some Billy Jack-esque themes.  And a lot of T&A.

The sleepy town of Noyo, California has fishing (and some other stuff) in its DNA, and so it makes sense that most of the plot of the film revolves around the subject, specifically the controversy about an intended cannery.  Many in the town see it as an economic windfall including Vic Morrow’s Archie Bunker-turned deadly sinister Hank Slattery and his coterie of slobbering and sycophantic hangers on.  A notable exception is Johnny Eagle (Anthony Pena) a character who stands in for the entire population of Native America.  Johnny regularly calls on others, including Jim Hill (Doug McClure) who is sane but disagrees with Johnny, and the aforementioned Hank Slattery who is a raging racist about everything to discuss the issue, but rarely gets much traction.  Morrow’s character comes across as a caricature these days, but I knew guys like that growing up in the 80’s so I bet he felt pretty real to contemporary audiences.

The movie has become notorious for its regular nude scenes, which were apparently inserted later at the insistence of producer Roger Corman, a legendary figure who inspires as much awe as consternation, and his statements and behavior on this film would seem to fall into the later camp.  It is said that his philosophy was that the monsters should “kill all the men and rape all the women,” and that is exactly what they attempt in this film.  When director Barbara Peeters shot the scenes, apparently some of the rape-y action was left to the viewer’s imagination.  She says that Corman balked and brought in and uncredited director to spice up the rapes and add more nubile female flesh.  Peeters and star Ann Turkel would eventually go public with their complaints about the additions and also asked that their names be removed from the film.

Despite its repudiation by its lead female star and its director, the film is legendary with one demographic: people who were adolescent boys in the 1980’s, so that includes people my age and a touch older. For us at that time, it really had it all: regular sex, lots of nudity, a simple plot with good guys to root for and bad guys to revile, a message about how to treat other people that felt good to young people, excellent gore with buckets of blood lost, and some amazing early monster work by special effects wizard Rob Bottin, who would go on to paint his own Sistine Chapel a couple of year later with the shapeshifting creature in John Carpenter’s The Thing.  The monsters are really well made and pretty scary to this day, and the gore still packs a punch.  When the monsters rip a chunk out of a person, we see everything underneath- blood, bone, organs, etc.

Humanoids from the Deep is ultimately what it sets out to be: competently made exploitation horror film that can still shock audiences 40 years after its release.