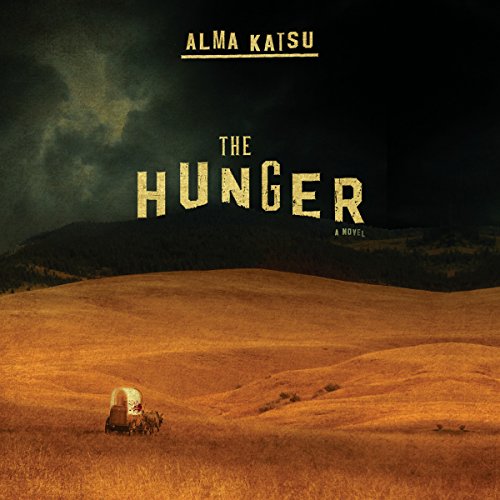 I just finished reading Alma Katsu’s The Hunger from 2018 and was delighted to learn that the author will be discussing her newest book The Deep at Saint Louis County Library on Monday, March 16th. My review of The Hunger follows.

There is no shortage of historical horrors marking the 19th-century westward expansion of the United States.  The Donner party and their taboo means of survival are permanently embedded in the more morbid corners of our collective imaginations. Alma Katsu’s novel, The Hunger, wastes no time connecting the fictional horrors with the real ones.   The book opens where you’d expect it to end, in the late winter of 1847 a rescue party arrives at the camp around “Donner’s Lake” finding scatterings of human teeth and vertebrae.  In any author’s hands, little in the way of artistic license would be needed to turn this historical yarn into a proper horror story, but it’s doubtful any other could make it stick the way this one does.  A little sensationalism goes a long way here. Katsu spends much of the book weaving her supernatural horror elements into historical gaps, making for an incredibly believable read. For fiction, this is such a well-researched book, that at times you have to remind yourself that the supernatural forces at work couldn’t possibly be real.

Plot-wise, it’s a very well crafted traditional horror tale. After reminding the reader of the ending, we turn the clock backward and find our protagonists, classically flawed individuals, the perfect sort for a macabre tale, early in their trek across the American West.  All of them seem to be running from something.. Much of the backstory is delivered in intermittent flashbacks. Whether Charles Stanton’s regrets, Tamsen Donner’s deceased husband and scandalous affairs, or James Reed’s secrets, these fictionalized versions of each character feel real and desperate in some way.

Trouble starts early, as a boy goes missing and is subsequently found torn to pieces.   This is only the first indication that something is following the wagon-train, picking off the isolated and weak.  Something feeding.

In all of my favorite horror stories, there is usually a singular voice giving warning, and a deliberate decision not to heed it.  Katsu finds that voice in the fictionalized version of real-life journalist Edwin Bryant who splits off from the party, after seeing the way they mismanage time and resources.  After riding ahead, he famously wrote to the wagon-train warning them not to take their planned shortcut. His warnings were never received. Here is one of many instances where Katsu works her sleight of hand. While away, Bryant learns something from the Paiute about the Hastings Cutoff and a strange affliction that causes men to hunger for human flesh.

Even in Bryant’s absence, there is no shortage of omens, be it the changing weather, dwindling supplies, or the supernatural intuitions of the Donner women, there’s a panicked sense of urgency to their situation.

As the signs of winter loom large on the horizon, the trail takes its toll on the wagon train, which moves at far too leisurely a pace, and is too cavalier with supplies, despite warnings. If my childhood games of Oregon Trail taught me anything it’s that these people should have died of dysentery long before having to eat each other, but that would be mercy next to the strange hunger that transforms members of their group into hungry beasts.  Think more vampire than zombie, and more demonic entity than vampire.

While reading, I couldn’t help but wonder if the drive to invent monsters here isn’t a kind of delusion that reflects attitudes of western exceptionalism. There would be a kind of escape offered by reducing the horrific details surrounding the Donner wagon party to supernatural monsters, but resisting these pitfalls is another area that Katsu’s work really soars.  Other authors might be tempted to lay blame firmly at evil’s feet, “the monster made them do it” bit, or worse attribute it to some native American mysticism. Katsu allows the reader to explore these events through artifice, before ripping that comforting blanket away, if only partially, leaving them to sit momentarily with the grave truths that serve as the skeleton of this story. You won’t make it through these pages without a reminder that much of this really happened, and human choices, not beasts, were ultimately the reason.

That isn’t to say there’s not a spooky supernatural horror tale here, she makes no effort to distance herself from the genre.  This is an author that wants to scare the hell out of you and seems to be having a blast doing it. For myself, I don’t think I’ll be able to sleep soundly camping out west ever again.  At the very least, she made me leave the lights on for a night. I look forward to picking up Katsu’s newest book The Deep, which takes a similar approach to the tragedy of the Titanic.