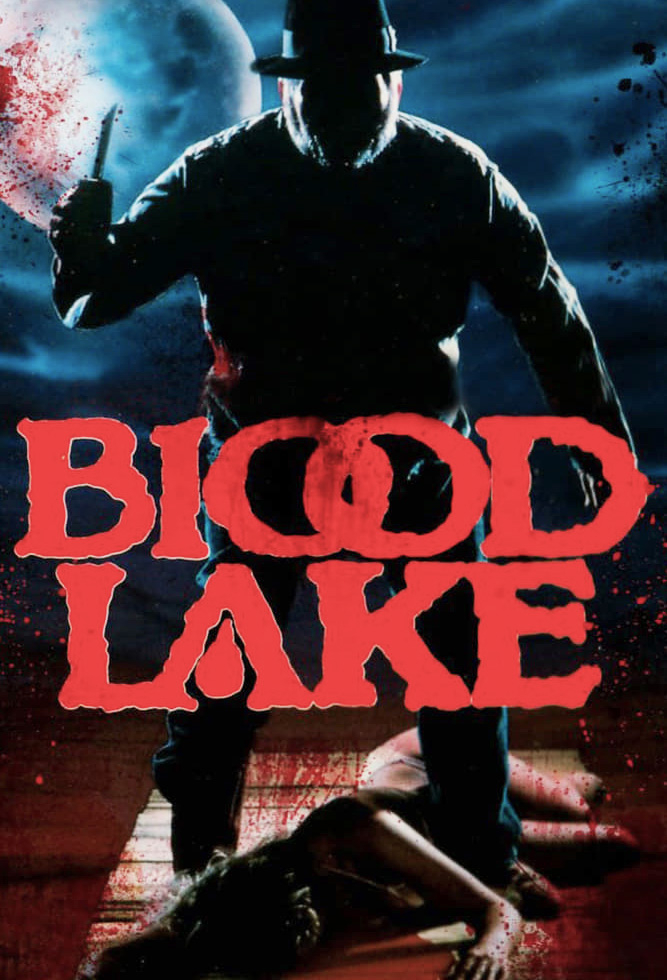 A review by Aaron AuBuchon

Watching Blood Lake is a curious thing because I grew up with the people in it.  I mean, not the exact people, but their species.  In 1987, the year Blood Lake was released, I was a 14 year-old high school freshman in a rural town in Missouri.  Most of the population of my high school were mulleted douchebags and their poofy-haired paramours, the kinds of people for whom “faggot” was simultaneously their deepest, most frequent insult and the thing they called each other most often.  Friendships were uncomplicated affairs, often revolving around agreement on whose asses most needed kicking and on the superiority of one of the American automobile manufacturers.  Blood Lake’s cast is entirely those people.  And watching the film is very much like being invited to their party.

I was never invited to their parties.

To be really fair, I didn’t want to be.  I was a punk rock kid, infatuated with horror movies, and those people were… not.  But now, about a hundred light years from that place and time, it’s pretty fun to watch them party.  And man do you get a chance to watch them party, as the first 52 or so minutes of this film feels exactly like watching shot on video home movies of some relatively well-off rednecks getting footloose and fancy-free (also known as fucked up.)  And, you don’t just watch them party, you really feel like you’re at the party; a participant.  Just one of the dudes.

The film starts with an anonymous murder then shifts to a title sequence featuring the finest corn-fed youths from deep in the belly of Reagan’s America, driving to Becky’s dad’s lake house for a weekend of beer swilling, pot smoking, and creepily nonstop sexual innuendo that teeters on the edge of an assault (for the characters and the audience).  That they are driving a Trans Am which is pulling a ski boat down rural roads accompanied by a hair metal soundtrack feels like such a perfectly appropriate setup for the film, I’m tempted to stop writing now and just let that image speak for itself as a metaphor for nearly everything that follows.  But I won’t.

If you’re like me, you want to hate a film that is spends its first hour detailing the banalities of dipshits on the loose for a weekend, but you can’t because you’ve been invited, bro! Rather than to be pissed that the film is mostly plotless, you just find yourself going with the flow.  The action seems so lived in, so real, that it’s almost disorienting.  These actors were having a hell of a good time, and it shows in the naturalness of the delivery. Nothing seems staged or phony, and people talk over each other, make grunts and noises as answers, and talk with their bodies as much as their mouths, just like in real life.  The conversations in Blood Lake are remarkably casual and lifelike. Braying phony toughness morphs into creeping sexual innuendo becomes general teenage assholishness and it all feels like “man, I know these people.”

The cast is perfect, because I’m pretty sure they are just playing themselves.  Doug Barry plays Mike (who also wrote the script), a doofus of a protagonist that eventually becomes relatively likable for his homespun heroics and capacity to deliver some logical thought and leadership when the previous hour made you pretty sure he was a dollar store Jeff Spicoli made slightly mean, sporting a repertoire of about seven phrases recycled ad nauseum (“I don’t know where he learns this stuff” comprising about half of his dialogue.)  Angela Darter is Becky, whose father owns the lake house and who exists in the film’s universe mostly to function as a whining buzzkill.  Mike Kaufmann and Andrea Adams are their friends Bryan and Kim, more ornaments than people, who are there to move the plot forward a bit and to die.  The most interesting character is Travis Krassner’s creepy junior sexual predator Tony, a guy who would undoubtedly grow up to become a dude the Me Too movement would describe with angry shudders. Watching him slither up to Christine Willoughby’s character Susan, who herself looks like she might yet be a whole handful of years out from her first period, is particularly disorienting.  Almost all of his dialogue can be distilled down to “I’M GONNA DO SEX ON ONE OR ANOTHER PRE-TEEN!” Hearing the sexual intentions of a kid who hasn’t yet sprouted his first leg hair makes me feel greasy and this film dumps the grease.  Tony drinks beer (“Are you gonna be a butthole this weekend or are you gonna let me drink”) and participates in the ritual of calling everyone “dickhead” and as fucked up as it sounds, you kinda wish he was at your house.  You kinda wish they were all there, sharing their mystifyingly unending supply of straw-colored beer with you, inviting you to play quarters and generally joining in on the dickheadery.  You wouldn’t like these people, but you like these people. That’s the magic of Blood Lake.

Eventually two more dudes, Dennis (Michael Darter) and Chuck (Darren Waters) show up and rather than developing a subplot about them causing tension or a rivalry of some sort, they are instead casually folded into the drinking and waterskiing that occupies most of the first hour.  Now the table is set for the greatest set piece of the film: the unbelievable seven-minute game of quarters.  “Lensed” in a static medium long shot and going on for at least ten times as long as it needed to, the quarters sequence highlights the odd dichotomy of this film.  Nothing, and I mean nothing happens in this section.  No plot points are discussed, no action happens, nothing important is learned about the characters other than Becky doesn’t like pot and neither does Dennis until he does and then smokes like three joints.  No thing.  They play quarters while talking about playing quarters. Through a montage separated by at least five cross dissolves, ostensibly to show you how loooong they played quarters, but really to function as an exercise in incredulity.  (“No way there’s more of this.  No. Way.  OH MY GOD THERE’S MORE OF THIS!”) And yet, somehow, defying all logic, it’s entertaining and you come out the other side feeling like you know them all a bit better.

(Other scenes of note include: Fury at the Door, Love On a VERY Dark Boat, and Sitting Around the Fucking Living Room Part Seven.)

Speaking of set pieces, the one I had a hard time believing was a scene before the quarters game in which Chuck and Dennis, tired of waterskiing and being called “dickhead” for a while, head back home and encounter the killer futzing around the windows of the cabin owned by Becky’s dad.   Upon seeing this, Dennis and Chuck give chase and threaten to “kick your ass” about sixty-two times, which runs the killer off.  Now, the killer is a large, beefy grown-ass man.  Dennis looks like a low rent Scut Farkus, and Chuck looks like he was turned down for a role in the party scene in Weird Science, and both have the body mass of recently cooked spaghetti.  The idea that a rural man of that era didn’t just turn around and beat the piss out of these hollering children seemed pretty unlikely to me, but it sets up the mayhem that follows.  Which is good because as much as I enjoyed hanging out with these folks, I also really, really enjoyed watching them die.

The killer, a guy who would need lessons if he tried to tuck in a shirt, eventually shows up and actually kills a bunch of people with a survival knife that was probably purchased for less than five dollars at a stall in a flea market whose name is associated with the losing side of the American Civil War.   The killings are competent and some are even nominally inventive, and the reason he’s doing the killings so entertainingly implausible that the whole really incompetent affair comes together and feels remarkably competent. Which isn’t really the point, but it’s part of that aforementioned magic.

Ultimately, the question I always ask myself is: would I watch this film again?  Pfft.  Don’t be a dickhead.  Of course I would.  And I recommend you do too.